Anybody have a guess at what a digital news subscription might cost in 2072?

And then there’s the problem of knowing what digital news subscriptions will look like in half a century. (Assuming news subscriptions still exist! Assuming news publishers still exist! Assuming we’re still calling it “digital” and not, like, “intercranial” or something! So many assumptions.) Will paying for news be even more of a niche activity than it is today, or will it be as normal as paying for whatever we’re calling the Internet by then? Will we pay as individuals, get access as an employee benefit, or fund them with tax dollars?

Fifty years is a long, long, long time. No one has any idea what the market for high-quality news and information will look like then.

But The Washington Post would like to offer you, today, an annual digital news subscription for $50 — for the year 2072. At least that’s the premise behind this intriguing subscription offer that arrived in my inbox Sunday: Subscribe to the Post today and we’ll guarantee you the same price for the next half-century. 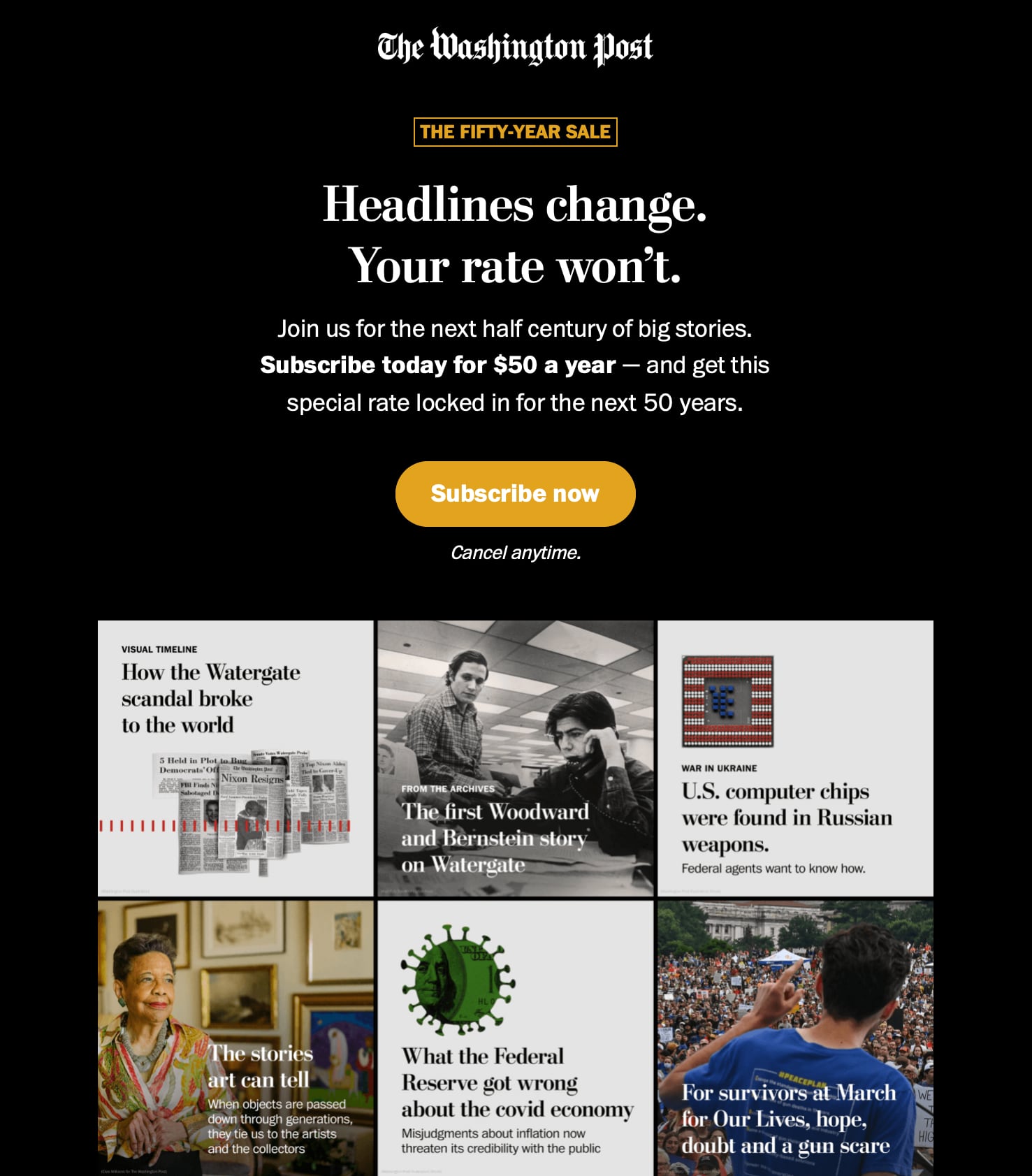 You can go grab the deal yourself if you’d like. (It expires Wednesday. I don’t get a cut, I swear!)

On one hand, this is just one discount promotion — one of the dozens the Post is testing and optimizing over any particular span of time. But this one stands out for its temporal ambition. Given that not many children are paying Washington Post subscribers, this is in effect a lifetime deal. A permanent hedge against news inflation, a price you’ll take to your grave.

An undiscounted Post digital subscription currently costs $100 a year. In 2072 — again assuming those Big Mac inflation rates — you’d expect that price to be a hair under $650. Fifty bucks would be quite a deal. (Again, assuming something resembling news even exists in 2072.)

(I asked the Post about the thinking behind the offer. “This special offer celebrates The Washington Post’s longevity and looks far into the future,” chief subscriptions officer Mike Ribero said in a statement. “It’s a once-in-a-half-century deal.” As for how many subscribers it’s generated so far, a spokesperson would only say they’ve “been delighted by the response to the offer.”)

So, what really stands out about this offer?

The Post is busy this month celebrating the 50th anniversary of the Watergate break-in, which you may remember it covered. So the 50-year timespan makes a certain rhyming sense: We were kicking ass five decades ago, and we’ll still be doing it five decades from now.

That’s no longer common. Of the 25 most popular news sites in the U.S., only 10 existed in any form 50 years ago — six as newspapers, three as magazines, and one as a TV network. And who knows what new news brands will be winning-the-mornings inside Apple’s AR glasses or Mark Zuckerberg’s meta-whatever?

In a news universe driven by social media and drive-by pageviews, it can be hard to build the sort of brand equity that turns an occasional reader into a subscriber. This offer emphasizes the Post as a truth-seeking institution that isn’t new at all this journalism stuff.

It highlights the Post’s steady ownership.

Could an Alden Global Capital newspaper come up with a subscription offer for 50 years out? Of course not — because who can say if any Alden paper will exist in even five years, much less 50? Being owned by one of the richest men in the history of the world offers a very different set of variables for financial planning.

Anything can happen, of course — maybe Jeff Bezos’ kids will grow up hating journalism and burn the place to the ground. Maybe he’ll lose the Post to Logan Paul in a late-night poker match. But it seems unlikely that Bezos will ever be financially forced to gut the Post or put it up to the highest bidder.

In his first interview after buying the Post in 2013, Bezos said that what he offered the organization was “runway.” In other words, a promise of time — time to take a breath, to stop worrying about impressing Wall Street, to avoid the sort of panicked strategies companies seek out when they fear the end is near. The Post is one of the few news organizations in America that can think in decades instead of years, and that’s a strategic advantage.

It reduces the urge to churn.

The Post, The New York Times, and a few other major outlets have found real success signing up digital subscribers. But subscribers become un-subscribers with alarming frequency.

Churn — the rate at which paying customers cancel — is a problem all across the subscription economy, from Netflix down to your local daily. It’s a lot cheaper to keep an existing customer than it is to find a replacement when she cancels. For subscription businesses, there is no higher goal than reducing churn.

A study by the media consulting firm Mather last year found that, for newspapers, the average weekly digital churn rate was 0.85%. In other words, if you have 10,000 subscribers, you can expect 85 of them to cancel each and every week. Over a year, that’s 4,420 cancellations — nearly half of your subscriber base! You’ll have to sign up that many new customers each year just to break even.

Part of the reason cancellations happen is that they’re easily reversible. I mean, it’s not as if Hulu won’t take you back if you change your mind in a couple months, right? If anything, you might luck into some sweet new introductory rate better than what you were paying before.

But a 50-year promise suddenly makes canceling the Post something that will affect your life decades down the line. It’s an asset you can’t get back if you change your mind next week. If things are tight and you’re debating which sub to kill, losing your permanent Post discount miiiiight be the little nudge that makes you cut something else.

So yes, it is just one discount promotion. But it’s one that plays to the Post’s distinctive strengths and raises the stakes for anyone considering canceling. If your goal is “to broaden the newspaper’s reach,” that’s valuable stuff.

There was, of course, no digital subscription to the Post back in the days of the Watergate Three. But 50 years ago, a seven-day print subscription, delivered to your D.C.-area home, would have cost you 98 cents a week, which adds out to…$50.96 a year.

Wow. Maybe fifty bucks — a dollar a week, more or less — really is the eternal price.

For more information, reach out to media relations manager, Shelley Coplin at shelley@mathereconomics.com.